These three large Mediterranean islands offer the best of Greek and Roman influences. Theatres, relics and archaeological sites like Pompeii are just some of the highlights of a cruise between Malta and Sardinia. The entire route is imbued with a taste of la dolce vita, appreciated by locals and travellers alike.

All about cruises Malta, Sicily & Sardinia

Ancient civilisations of the Eastern Mediterranean

Splendours of the Western Mediterranean

The Charm of Italian Shores

Island Hopping in the Mediterranean

Wild and volcanic coasts of the Mediterranean

The charm of the Western Mediterranean

Cruising the Mediterranean: Greece, Sicily, and Malta – with Smithsonian Journeys

Southern France and the Italian Riviera by Sea – with Smithsonian Journeys

Ancient jewels of the Mediterranean

Spectacular monuments, gourmet food and unexpected discoveries... We have put together a list of unmissable experiences in Malta, Sicily and Sardinia. 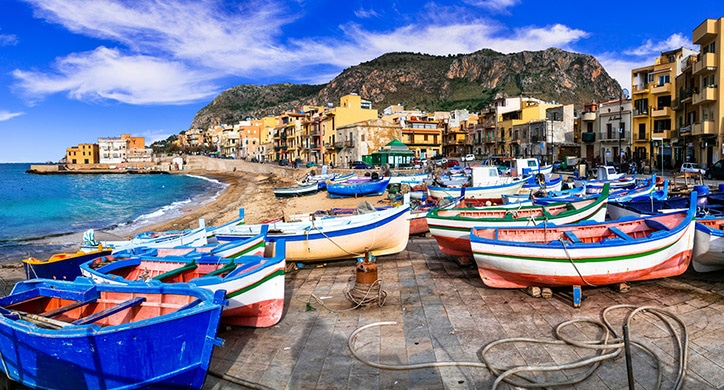 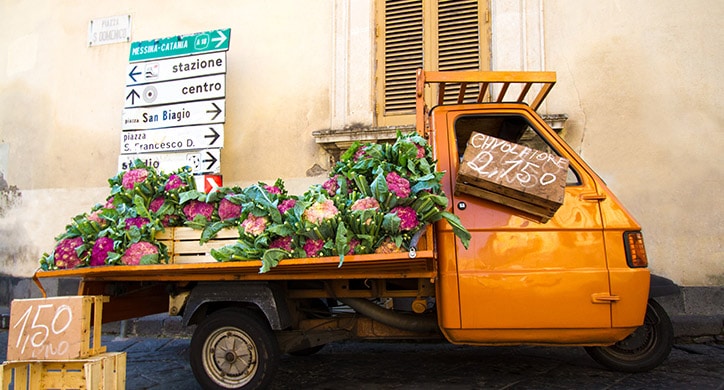 Spectacular monuments, gourmet food and unexpected discoveries... We have put together a list of unmissable experiences in Malta, Sicily and Sardinia. 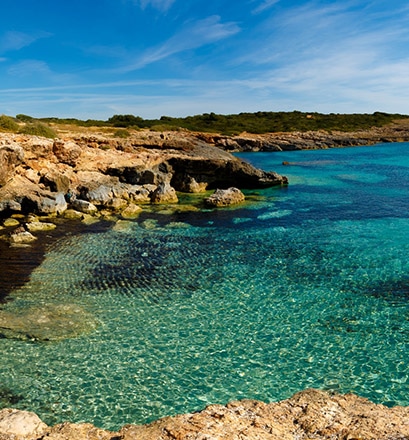 Dive into the Blue Lagoon on the island of Comino - Malta

A small uninhabited island in the Maltese archipelago, Comino is best known for its Blue Lagoon. This landmark is actually a channel between Malta and the neighbouring island of Cominotto. Also known as the Fliegu Strait, it is one of Malta's most beautiful natural sites. With a shallow sandy bed and exceptionally clear water, the Blue Lagoon is a stunning spot for a swim. 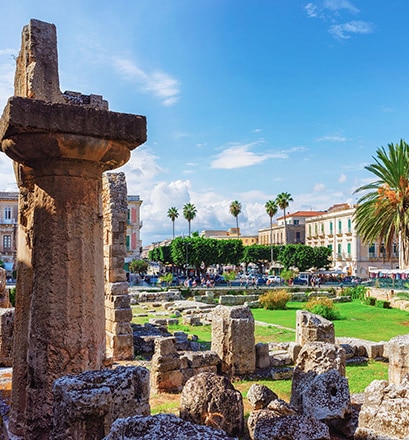 A trip to Syracuse is like taking a journey back in time. The Neapolis Archaeological Park is home to a fascinating collection of ancient monuments: the amphitheatre of Syracuse, where big cats and gladiators once fought; the Altar of Hieron; the Ear of Dionysius, an old quarry and former prison; and one of the most beautiful theatres in the Hellenic world. In Syracuse itself, visitors can explore the ruins of the Temple of Apollo, dating back to the 6th century BC, as well as the Temple of Athena and several 15th- and 16th-century palaces. Described as the most beautiful city in Greece by Cicero, Syracuse is a veritable living museum. 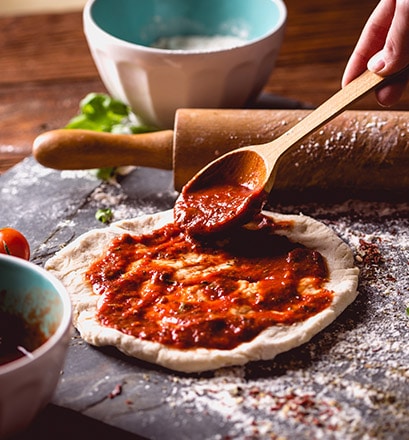 A classic Mediterranean fishing port, Lipari is the main town of the Aeolian Islands. The citadel that towers over the town symbolises the important role the island played in ancient times, a status it owed largely to its obsidian quarries. In this picturesque setting, a local restaurateur has decided to open the doors of their pizzeria to reveal the secrets of Italy's national dish, letting you prepare your own pizza to enjoy with a good wine and a selection of local specialities. 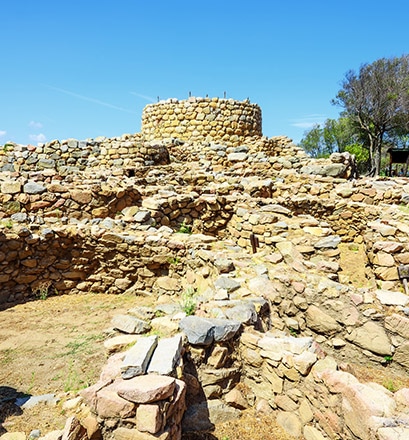 A 45-minute drive from the stylish village of Porto Cervo is the Nuraghe La Prisgiona, a partially restored Bronze Age archaeological site. The findings date back to the construction of the village between the 14th century and 9th centuries BC, with several mysterious towers, wells and imposing structures. Just 600 metres away lies the Giants' grave, a uniquely Sardinian collection of strange tombs, burial chambers and granite steles. 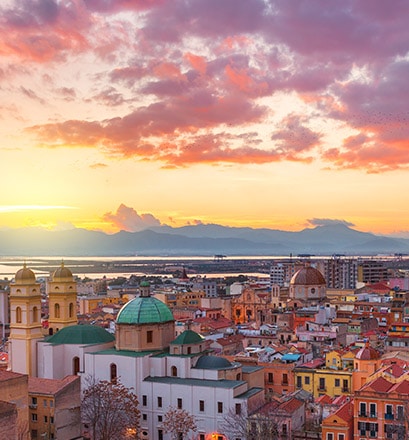 The capital of Sardinia has always played a vital strategic role. As you explore Cagliari, you are walking in the footsteps of the different civilisations that shaped it. The first evidence of human settlers dates back to the Neolithic era, but the city has known many different rulers over the centuries: the Carthaginians, who built a great necropolis; the Romans, who were responsible for the amphitheatre; the Byzantine Empire, which established the basilica; the Republic of Pisa; Habsburg Spain; and finally the Kingdom of Sardinia. Wonders await around every street corner!

Dos. When in Rome... Dress to impress. The same rule also applies in Malta: appropriate attire is required in town and on the beach and can even be enforced by the police.

Don'ts. In Italy, adding parmesan to your pasta with fish or seafood may not go down well with the restaurateur. And remember, you can only order a cappuccino in the morning!

When it comes to shopping, Malta an ingenious system all of its own. Forget supermarkets: you can buy everything you need, from washing powder to fresh fruit and vegetables, from the travelling shop parked at the corner of the street. Some locals prefer not to leave the house to do their shopping, relying instead on a system of baskets, ropes and pulleys to bring their provisions in through the window.

Hello / Good evening: Buongiorno / Buona sera
Goodbye: Arrivederci
Welcome: Benvenuto
Excuse me / please: Scusi / Per favore
Thank you: Grazie
Yes / no: Si / No
How are you?: Come sta ?
Very well, thank you, and you?: Molto bene, grazie. E lei ?
My name is…: Mi chiamo...
*In Malta, the main foreign language taught and spoken is Italian. We therefore chose to focus on Italian vocabulary.

The local cuisine of Italy and Malta is rooted in the concept of "cucina povera", which refers to the cooking of the poor. In short, it means preparing delicious gourmet dishes at a low cost. Sicily is the land of caponata, a stew of aubergine and tomatoes, and stuffed rice balls known as arancini. In Sardinia, you can enjoy some malloreddus, a type of gnocchi served with tomato sauce and local sausage. Malta is home to ftira, a kind of pan bagnat coated with olive oil and filled with tomatoes, onions and garlic.

Where is the mythical island of Ogygia, where Odysseus was held captive by Calypso? According to locals, it is actually the island of Gozo, which belongs to the Maltese archipelago. Ramla Beach, in the north of Gozo, has been identified as the home of the nymph. However, given that the location of Ogygia has been up for debate since ancient times, it is unlikely to be settled any time soon!

The Nature Trust Malta NGO was founded in 1962 with the aim of protecting the Maltese environment and promoting responsible behaviour. The organisation offers visitors the opportunity to adopt a turtle for 25 or 50 euros per year via its website. The funds raised are used to finance the Wildlife Rehabilitation Centre, which treats injured turtles.

Book. In working-class Sicily, people are breaking their backs just to get by, generation after generation. They are known as I Malavoglia, which means "The Reluctant Ones". Against this backdrop, the Toscani, a family of fishermen, are struggling to try to climb the social ladder. In a society that is weighted against them, changing their fate often seems like an impossible task. This classic novel by Giovanni Verga (2015, Dedalus Ltd) delivers a poignant family saga worthy of Zola, set in a Sicilian landscape that is dominated by the sea.

Music. Għana, the traditional music of Malta, draws on Italian and Arabic influences. It originated on the roof tops, where women used singing to communicate with one another. Today, Għana is an art in its own right, with a wide repertoire of quatrains and guitar melodies.

Film. The winner of the Palme d'Or at the 1977 Cannes Film Festival, Padre Padrone (Vittorio and Paolo Taviani) is an adaptation of Gavino Ledda's autobiographical book. We follow Gavino from the age of five until he leaves for military service, where he is able to break free from the chains of his wasted childhood. As a child, he has to quit school to help his father work on the farm. In the mountains of Sardinia, Gavino is extremely isolated from society. Thanks to the army, he is finally able to learn to read and escape from under his father's thumb.

Sicily is often associated with the number 3: the island itself is triangular, a three-legged gorgon appears on the flag, it has three major mountains and three historical regions, and the strait that separates the south of the island from the boot of Italy is 3 km wide.