A cruise to Thailand will take you from peaceful islands to UNESCO World Heritage Sites. The incredible landscapes combine with the spiritual atmosphere to create a timeless adventure. A visit to Thailand is also a chance to discover the incredible sights of the virtually unexplored country of Myanmar.

All about cruises Thailand & Myanmar

A cruise to Thailand and Myanmar will transport you to a whole new world, where adventure and relaxation go hand in hand. Whether you are wandering the city streets or heading off the beaten track, wonders await around every corner. 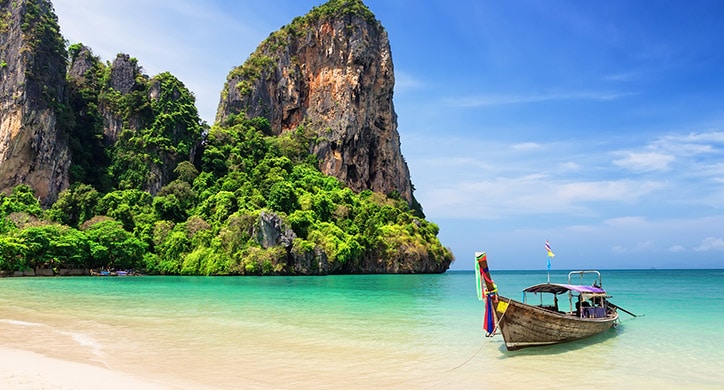 Spontaneous adventures are fun, but taking the time to understand the local customs will help you get the most out of your trip! So what do you need to know before setting sail for Thailand? We have put together a little travel guide for all you visitors to Southeast Asia. 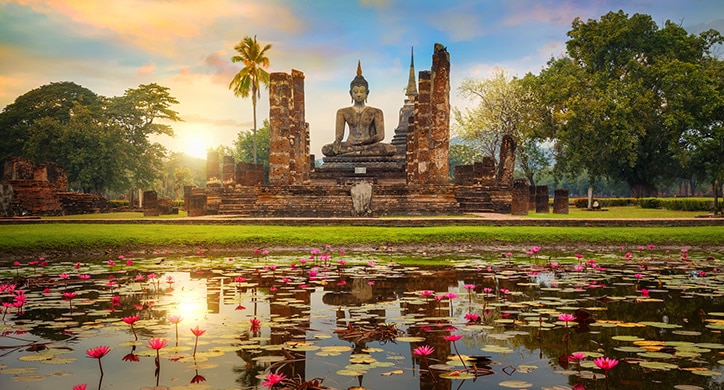 What to bring back from Thailand?

A cruise to Thailand and Myanmar will transport you to a whole new world, where adventure and relaxation go hand in hand. Whether you are wandering the city streets or heading off the beaten track, wonders await around every corner. 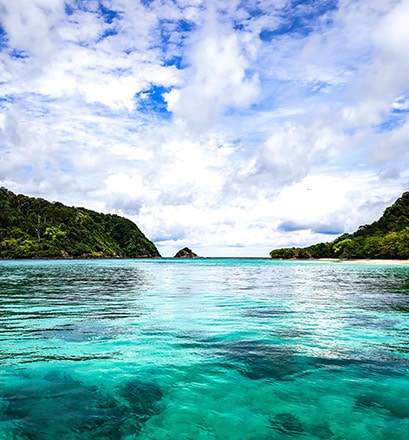 Commune with nature on the island of Koh Rok Nok - Thailand

Around thirty kilometres from Koh Lanta, Koh Rok Nok offers a peaceful escape from its crowded neighbour. In fact, the only people living on the island are the rangers charged with protecting this national park. With two magnificent beaches looking out over an endless turquoise sea, Koh Rok Nok is a picture postcard come to life. Most of the island is also covered with lush foliage, including rainforests, mangroves and jungles of huge banyan trees, which are believed to be sacred. The perfect place to embrace your inner Robinson Crusoe! 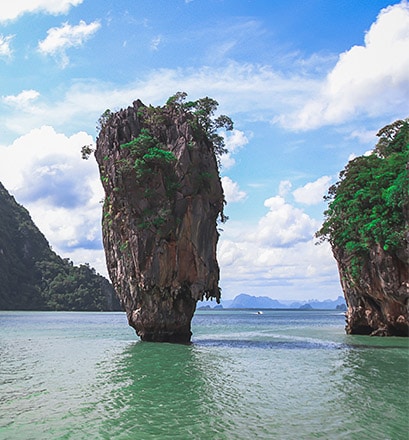 The karst islets seem to float on the surface of the water, their ochre spires piercing the sparkling blue sea, while the trees clinging to the rocks look like they are about plunge into the peaceful expanse... Welcome to the Garden of Eden. The wonders of Phang Nga Bay are best explored on the water: visitors can take a speedboat to James Bond Island, where the final scenes of The Man with the Golden Gun were filmed, and Ko Panyi, a floating village of houses on stilts. 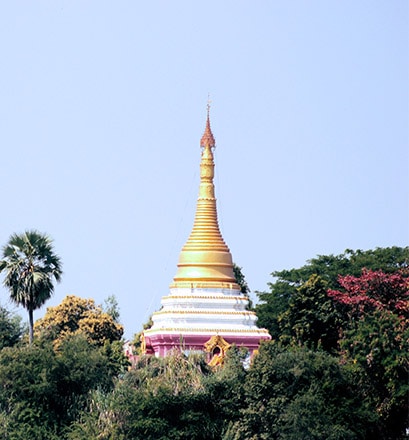 Marvel at the temples of Bagan, Mandalay Region - Myanmar

The capital of Myanmar in the 11th century, Bagan is one of the most incredible historic sites in Asia. This distinctive landscape is dotted with 2,000 temples and pagodas, their delicate towers and spires reaching up towards the sky. Built at the beginning of the 13th century, the Gubyaukgyi Temple houses some of the most beautiful frescoes in Bagan, depicting famous Buddhist stories. Bagan is also renowned for its craftsmanship, especially enamelware, which is known throughout the country. 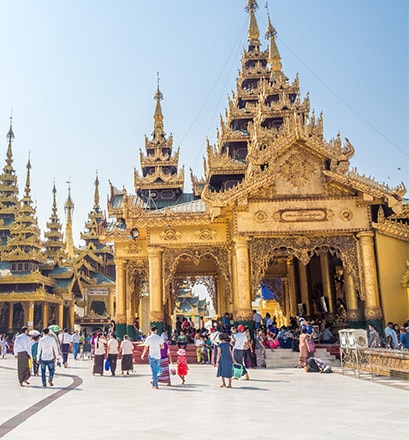 Wander the streets of Yangon - Myanmar

Once known as Rangoon, Yangon has retained all of its former splendour. One shining example is the Shwedagon Pagoda, an architectural masterpiece built over 2,500 years ago. The outside of its stupa is covered with more than 8,600 gold plates, and the spire is encrusted with more than 5,400 diamonds and 2,300 rubies, sapphires and topazes. Another local monument, the Chaukhtatgyi Buddha Temple shelters a reclining Buddha statue measuring an astounding 70 metres in length. This rich spiritual world contrasts with the colonial city centre of the former capital of Myanmar: the wide streets and imposing Victorian buildings are a testament to the British presence in the country until 1948. 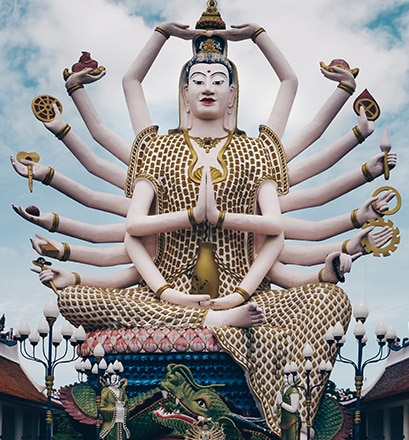 The jewel of the Gulf of Thailand, Ko Samui is one of the country's most famous islands. Its sandy beaches are bordered by palm trees on one side and crystal clear water on the other, looking out over a fascinating seascape of karst islets. For a relaxing island getaway, look no further than Ko Samui. In addition to beautiful beaches, it is also home to numerous cultural landmarks: the Big Buddha Temple, with its 12-metre statue; the Plai Laem temple; and the We Green Farm cultural park. 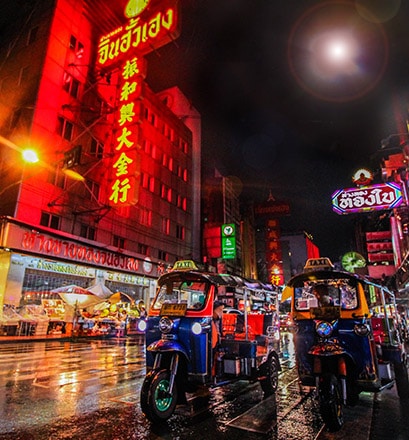 Thailand is known around the world for its tasty and refined cuisine, which can be enjoyed at all hours in small bars, at the market or from carts in the street. In the Chinatown district of Bangkok, the influence of the Chinese community, who have lived in Thailand for the past 200 years, can be seen in the diverse and delicious dishes on offer. Combining a variety of spices with sweet and spicy notes, these gourmet creations will delight the most discerning diners. Yaowarat Road, the main artery of this colourful neighbourhood, has some of the best street food in town: visitors can enjoy pad Thai, stir-fried noodles, various soups, seafood, curries and fresh fruit juices! 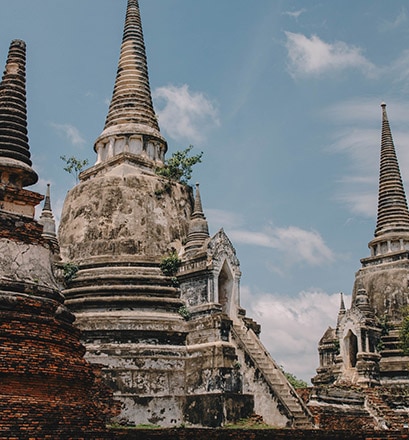 Certain locations exude silence and contemplation: Ayutthaya is one such place. Founded in 1350, the city was the capital of the kingdom until 1767, when it was attacked and destroyed by the Burmese. Scattered over an area of around 15 km2, the ruins showcase the city's former splendour and the important role played by its temples. The seated Buddhas of Wat Chaiwatthanaram and the bell-shaped chedis of Wat Phra Si Sanphet represent some of Ayutthaya's most striking monuments. Listed as a UNESCO World Heritage Site since 1991, the site is a must-see for any visit to Thailand. 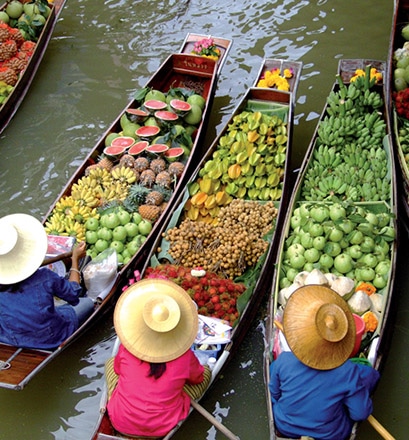 Lose yourself in the markets of Thailand

In Thailand, food markets cater to passers-by in search of a tasty meal on the go. However, some of the country's more unusual markets are a destination in their own right. For example, the Damnoen Saduak Floating Market, with its traditional boats loaded with colourful local fruits and vegetables, is a truly extraordinary sight. A little further afield, the fascinating Maeklong Railway Market sits directly on the railway tracks. When a train is approaching and the warning bell sounds, the merchants quickly repackage their products and fold away their awnings. Once the train has passed, everyone picks right back up where they left off.

Visit the palace and temples of Bangkok - Thailand

Not even the most determined traveller could visit all of Bangkok's temples and monuments in a single day. However, some of the city's most important sites are definitely worth a stop, including the Wat Taimit temple and its solid gold Buddha. The Grand Palace, built in 1782, houses the Wat Phra Kaew temple, which in turn holds the country's most revered statue of Buddha: the Emerald Buddha. Known for its 78-metre spire, Wat Arun, the Temple of Dawn is also quite a sight to behold.

Spontaneous adventures are fun, but taking the time to understand the local customs will help you get the most out of your trip! So what do you need to know before setting sail for Thailand? We have put together a little travel guide for all you visitors to Southeast Asia.

Dos. When visiting a temple, you must take off your shoes and ensure that your shoulders and legs are covered. In Thailand, the standard greeting consists of bowing your head with your hands pressed together. This gesture, known as the wai, is a sign of politeness and respect.

Don'ts. When the national anthem is playing (every day at 7 a.m. and 6 p.m.), it should not be interrupted. Disrespecting Buddha or members of the royal family is considered extremely offensive. You should therefore avoid stepping on bank notes or stopping coins with your feet, because they feature an image of the king, and the feet are the most "impure" part of the body.

Enjoyed throughout the country, Pad Thai is the national dish of Thailand. It is made from rice noodles sautéed with chicken or shrimp (or both), spring onions, garlic, scrambled egg, bean sprouts, soy sauce, red chilli and roasted peanuts. Finally, the dish is sprinkled with lime juice after it is brought to the table.

A symbol of peace and prosperity, elephants have been something of a sacred animal in Thailand since the foundation of the Kingdom of Siam in the 14th century. The white elephant was the emblem of the Ayutthaya Kingdom until the 18th century, representing divine royal power. Its significance is also rooted in Buddhist mythology, in which the elephant god Ganesh is associated with wisdom and knowledge.

Maha Vajiralongkorn Bodindradebayavarangkun became Rama X in December 2016, when he inherited the throne of Thailand, two years after the death of his father, Bhumibol Adulyadej (Rama IX). Crowned in May 2019, he is a somewhat controversial figure due to his many eccentric habits. For example, he posthumously promoted his miniature poodle to the rank of air chief marshal. On 28 July 2019, Rama X revived an old tradition that had been forgotten for over a century: taking an official concubine. However, Sineenat Wongvajirapakdi, also known as Koi, was removed from the role in October 2019 for "disloyalty", after she was accused of attempting to take the place of the queen. Rama X has also renounced two of his former wives, who have not appeared in public since.

Books. High Banks, Heavy Logs, Nikom Rayawa, 2007, paperback. "In the morning there was fog. Majan was holding her basket with one hand and helping the boy down the stairs with the other. The lagging child was brimming with life. They climbed the hill in the damp grass and entered the cool mist.
A rainbow shone before them as the sun began to warm the world." The forest, the river, the elephant, the man, his wife, the child: we are immersed in the traditions of Siam, now Thailand, surrounded by the splendour of nature. But all is not "luxury, calm and pleasure". Nikom Rayawa's carefully crafted simplicity gives his story a remarkable sense of authenticity. This beautiful novel, caught between violence and tenderness, offers a deeper understanding of a popular tourist destination.

Music. French composer and conductor Laurent Couson is known for his collaborations with film director Claude Lelouch. Based in Thailand, he has conducted the South Asia Symphonic Orchestra and the Bangkok Chamber Orchestra since 2015. He brought together 65 Thai musicians to create this symphony orchestra, with which he has recorded several albums.

Film. Adapted from Alex Garland's book by Danny Boyle, The Beach features Leonardo Di Caprio, Guillaume Canet and Virginie Ledoyen as three young backpackers in search of an idyllic beach in a remote Thai archipelago. They end up in a New Age community, cut off from the world, and believe they have found the ultimate bohemian paradise. Unfortunately, their arrival creates ripples in this self-sufficient community, resulting in an outbreak of extreme violence.